The cinnamon brown sugar cortado is a perfect coffee recipe for any time of day. It has made my favorite fall coffee recipes list, but you can make it all year round.

This homemade cortado recipe is a combination of espresso coffee and steamed milk, and it’s made with homemade cinnamon brown sugar syrup, which makes it extra special.

It’s a simple coffee drink, but this combination is so delicious you’ll want to sip it all day!

What is a cinnamon brown sugar cortado?

This drink is great all-around. It’s great for most people because of its complex flavor notes.

If you love espresso with a bit of milk and some sweetness, then this drink is perfect for you! Have a look below for the taste notes of this drink:

What does a cinnamon brown sugar cortado taste like?

The indulgently creamy taste of a cortado is the ultimate pick-me-up morning beverage. In particular, a cinnamon brown sugar cortado hits the spot, working to warm up the body from the inside out.

It has a robust taste to it from the espresso while still having a smooth note of the steamed milk. Then, there’s the homemade cinnamon brown sugar syrup for a spicy and sweet sensation.

If you love espresso coffee as much as I do, this is the perfect drink for you. And if you’re not that big of a fan, you can add a bit more homemade syrup or milk to your cortado to make it taste more milk-forward.

Which ingredients are used in this recipe?

This cinnamon brown sugar cortado is easy to make at home and uses just three ingredients:

The milk used in the beverage needs to be top quality, so it’s usually made using whole milk to give it the fullest flavor possible.

However, if you prefer using a different kind of milk, feel free to do so. You can choose to use low-fat milk or even your favorite dairy-free alternative for this recipe.

It’s all up to you and the flavor you like the most.

Below, you’ll find my tips on making the best espresso at home and the recipe for the homemade cinnamon brown sugar syrup.

How do you make the best espresso at home?

With that setup, you can make high-quality espresso shots that will make this cinnamon brown sugar cortado taste the best.

However, espresso machines can be quite expensive, and if you don’t have one at home, you can also use the following coffee brewers:

Both coffee brewers can achieve a similar strength and taste as an espresso machine, but they are much more affordable and also don’t require much space in your kitchen cabinets.

If you want to learn how to make great coffee with these coffee brewers, you can check out my beginner’s guide to brewing coffee.

Every coffee bean has a unique set of flavors, so it’s best to try a few until you’ve found a favorite coffee bean!

If you’d rather make a drink that is more milk-based than espresso-forward, then you can also check out a great recipe for a cinnamon brown sugar latte.

It's best to make the cinnamon brown sugar syrup in advance, so you can easily make this recipe in just a few minutes. Let's get started:

You can start with the cinnamon brown sugar syrup in your coffee cup and let the espresso coffee pour into it for ease of use.

I love sugar syrups. They taste great with every coffee and will sweeten it just right.

And the best part is that you can flavor it however you want, and for this recipe, cinnamon is added.

Sugar syrups are also easy to make and use a 1:1 ratio of sugar to water. You can even choose the sugar to use, which will change the flavor of your syrup.

For this cinnamon brown sugar syrup, the following ingredients are used:

That’s all there is to it. Once you’ve finished making it, the coffee syrup will look like this:

Now that you know about the small list of ingredients used, you can find the complete step-by-step recipe here.

Over there, I’ll guide you through this delicious recipe, and you can then use it for this cortado recipe and so much more!

How much caffeine is in a cinnamon brown sugar cortado?

Because a cortado is made using two espresso shots, it has a total of 136 mg of caffeine. (source)

This drink is perfect for the early morning, so you have enough energy to get through the first part of the day.

If you’d rather make this drink with one espresso shot, you can use the same amount of milk and coffee syrup or use half the amounts of everything, resulting in a smaller drink.

The cinnamon brown sugar cortado recipe is easy to make, but the drink itself will be very satisfying.

It’s perfect for this time of year because it has all those cozy flavors that remind you of Christmas and winter, but it’s great year-round.

I hope you’ll give it a try! If you’ve tried it, let me know how it turned out.

What other drinks would you like to see on the blog? Let me know! I’m always looking for new recipes or drink ideas. 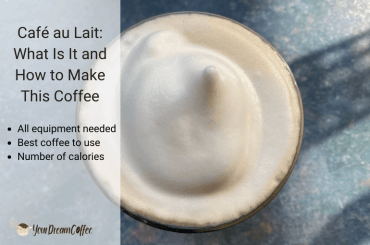 Café au Lait: What Is It and How to Make This Coffee in 2023 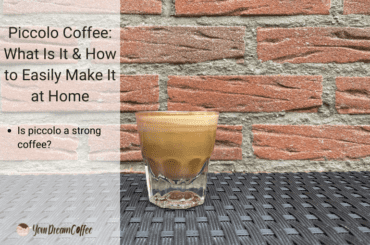 Piccolo Coffee: What Is It & How to Easily Make It at Home 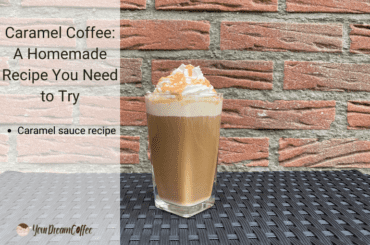 Caramel Coffee: A Homemade Recipe You Need to Try in 2023

Americano With Milk: What Is It and Should You Try It?

Caramel Coffee: A Homemade Recipe You Need to Try in 2023

Blueberry Iced Coffee: How to Make This Tasty Drink at Home 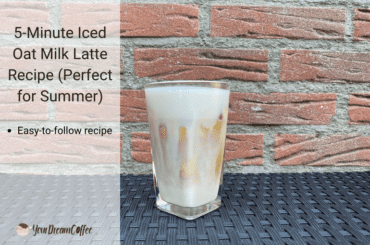 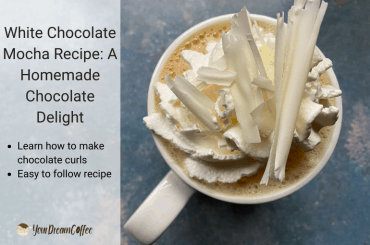