Trying to stay on top of the latest trends in coffee can make you dizzier than a triple-shot espresso. Cold coffee has also evolved—from iced coffee to cold brew, and now to nitro cold brew. So what exactly is nitro cold brew?

Nitro cold brew is made by cold-brewing coffee and infusing the resulting coffee with nitrogen gas. This process preserves the flavor and freshness of the beans. As a result, the drink has more caffeine but less acidity than other coffees and a creamier and sweeter taste.

What started as a boutique coffee in specialized coffee houses has become mainstream.

Of course, you can still get a glass from your favorite café, but canned nitro is available in grocery stores, and giant retailers like Starbucks have it on their menus. Read on to learn more about nitro.

What is nitro cold brew?

Nitro cold brew coffee is coffee that has been nitrogenated, or infused with nitrogen gas, after being brewed with cold water. The nitrogen bubbles generate a foamy top, giving the coffee the appearance of a dark stout, ale, or lager beer.

Additionally, canned nitro cold brew can be found at grocery stores, and you may brew your nitro coffee at home.

People often compare the appearance of nitro coffee to a Guinness beer because of the similarities in their appearance.

In truth, nitro cold brew was most inspired by bartenders’ practice of infusing dark beers such as stouts, ales, and lagers with nitrogen gas rather than carbon dioxide.

There is a dispute over who initially created nitro coffee. It might have been Mike McKim in Austin, Texas, or Nate Armbrust in Portland, Oregon.

But, if you dig a little deeper, a third person, Lorenzo Perkins, also in Austin, Texas, claims to be the first person to serve it publicly.

Why is pure nitrogen essential?

Pure nitrogen is essential as it makes the coffee sweeter. The early developers of nitro coffee realized that carbonated cold coffee needed pure nitrogen. They tried using the 75/25 nitrogen and carbon dioxide mix used to make tap micro beers and Guinness, but this mixture resulted in bitter coffee.

The problem with using carbon dioxide is that it leaves a bitter taste as it dissolves. Flat sparkling water tastes acidic because of this.

So after much experimentation, developers realized that pure hydrogen would dissolve slowly and give the perception of a creamier drink. Therefore, if you try to make nitro at home with carbon dioxide chargers, the results will be bitter.

What is the difference between iced coffee, cold brew, and nitro coffee?

To explain the difference between the three, let’s start with iced coffee and cold brew.

Iced coffee is fast and easy to make. First, you brew coffee and pour ice over it. If you plan to make a large batch to refrigerate, add more coffee grounds when you brew it.

So why not use iced coffee and infuse it with nitrogen to make nitro coffee?

The answer is chemistry. Researchers analyzed hot and cold-brewed coffee for both antioxidant and acidity levels. They found that the levels of caffeine were similar and that hot coffee extracted more antioxidants while brewing. (Source)

Although antioxidants are healthy, they also don’t impart much flavor. However, acidity does, and the cold brew has less acidity. Cold or iced coffee tends to be acidic, which any coffee drinker knows when heating up day-old coffee.

So if you make nitro at home with iced coffee, expect it to be bitter.

Nitro cold brew contains more caffeine than hot coffee. Several factors, such as the temperature used when brewing the coffee, the length of brewing time, and the type of beans used to make the drink, can all play a role in determining the caffeine content.

Making a direct comparison between the two is difficult because the coffee quantity and how it is made affect the caffeine content. Based on information from Medical News Today, these are typical caffeine levels in coffee beverages:

A direct comparison between the coffees in the following chart is based on Starbucks’ standard 12-oz cups.

These are caffeine levels for 12 oz (340 ml) of several Starbucks coffees:

Even within one brand, caffeine levels vary greatly, depending on how the drink is produced and the roast level of the coffee.

So, nitro brew generally has more caffeine, but it’s possible to find hot brewed coffee with similar caffeine levels to its nitro counterparts.

Again, it’s all about the roast and brewing process.

How is nitro cold brew made?

Nitro cold brew is made using a two-step process:

The good news is that making nitro coffee at home is not complicated as it seems. If you can make cold brew, you can make nitro after purchasing a few pieces of equipment.

Coffee shops make their nitro by first preparing a cold brew, then it is poured into a metal keg.

The nitrogen gets infused with a specialized infuser that infuses the nitrogen into the cold brew. The keg then gets connected to a tap system so the nitro coffee can be poured into a glass with its signature texture and foam.

It sounds simple, but the faucet, gas tanks, keg connectors, tubes, and hoses must be installed and maintained.

In addition, the baristas need to be trained to use the equipment. Adding nitro coffee to a menu can easily cost a coffee shop $1,500 to $2,000, which is why they have to charge a premium for the drink.

Many fans have begun making nitro cold coffee at home to save money.

Making nitro coffee at home is not difficult. You will need to make cold brew coffee first and then add nitrogen. To do that, you will need a whipped cream dispenser and nitrous oxide cartridge.

Here’s a six-step process that will get you drinking homemade nitro in no time:

Tip: If you want to learn more about the best way to make cold brew coffee at home, you can check out this step-by-step guide.

What are the best coffee beans for making nitro coffee?

The best coffee beans for nitro coffee might not be the ones you like the best and are a lighter roast. Cold brewing coffee will affect the flavor profile, and you may discover that the flavor you love will get lost in the cold brewing process.

Although medium and dark roasts are usually recommended, how you grind the beans is essential. You can ruin your favorite coffee by incorrectly grinding the beans.

In general, nitro and cold brew coffee reduce the coffee’s acidity level, so some people use a lighter roast to reduce the acidity in the roast, as lighter roasts are more acidic than dark roasts.

Dark roast coffee has rich flavor notes, such as chocolate, earthy, nutty, or even a little syrupy.

These notes will overpower light floral notes of lighter roasts or single-origin varieties.

One other reason why people prefer dark roasts for nitro coffee is that the roasts are less expensive. Single-origin varieties are more expensive, further adding to the extra expense of nitro coffee.

Just keep in mind that if you decide on a lighter roast, you’ll need to plan on a longer extraction time to obtain the flavor you’re after. Still, the best place to start experimenting is your favorite coffee.

If you start with a coffee that you know, you can better identify the changes in flavor.

Tip: If you’re still looking for some great coffee beans for cold brew coffee, you can check out my recommendations here.

So, how fine should you ground your coffee beans for cold brew?

The best grind is a coarse grind for several reasons. For one thing, the coarse grind will start pouring the quickest. However, a fine grind will be excessively dense, causing the water to flow too slowly.

As a result, water tends to collect above the bed of fine coffee grinds, leading to patches of unbrewed coffee. Furthermore, fine grinds can sometimes have a harsh, bitter flavor due to over-extraction.

The water can easily flow through the beans and extract more of the flavors with a coarse grind:

I’ve made cold brew with a fine grind size to test it out. If you’re interested in learning about the results (it may surprise you!), you can check out the article here.

Does nitro cold brew have alcohol?

Although numerous factors contribute to this misperception, nitro cold brew does not have alcohol. Some people believe it includes alcohol because it is processed with nitrogen, the same component used in producing certain beers such as Guinness.

Nitro coffee has a similar mouthfeel to stouts like Guinness, and some beers have coffee tones in their flavor profile.

Another thing beer and nitrogen-infused coffee have in common is that both can be poured straight from a tap. But there is no alcohol in the nitro coffee.

Can you heat nitro coffee?

You can heat nitro coffee. The process starts with making a cold brew, then adding the nitrogen and storing it. When the coffee is heated, the nitrogen will reduce faster than cold nitro. Hot nitro is a hard-to-find boutique coffee, and only a handful of coffee shops serve it.

Besides people’s reaction that it sounds like hot soda pop, the biggest hurdle is that hot nitro requires even more specialized machines that heat the coffee while maintaining the nitrogen level.

At least one company, NitroBrew, sells a kit for making hot or cold nitro drinks at home.

The kit includes a kettle, nitrogen charger, and air compressor. However, prepare yourself for sticker shock, as these kits are specialized and don’t benefit from mass production price reductions.

You can check out this article to learn about the best way to heat cold brew coffee if you’re interested in learning about its flavor profile.

Why is there less acid in nitro?

Nitro enthusiasts claim there is less acid in nitro, but what could cause the acidity to be lower?

Is there a simple explanation, or do you need a chemistry background to understand terms like “deprotonated acid,” “radical scavenging capacity,” and “CQA isomer concentrations?” Not really.

There is less acid in nitro because hot brew methods extract more acids from the beans. These acids could be responsible for the increased levels of antioxidants in hot coffee. However, these deprotonated acids also remove more acid from the beans, and the acid becomes part of the coffee you drink.

Since cold brew leaves more acid in the beans, it is less acidic.

Is nitro cold brew bad for you?

Although there are some health benefits for antioxidant-rich coffees, the drink also comes with some risks.

Generally, over 500 mg of caffeine consumed can lead to some symptoms of “caffeine overdose.” (Source)

Moderate coffee consumption (400 mg/day of caffeine) can be incorporated into healthy eating patterns according to the Dietary Guidelines for Americans 2015-2020.

When nitro first made its appearance, many in the coffee world thought it was a fad that would disappear.

However, a decade later, the nitro cold press is still around. The combination of cold-brewed coffee and nitrogen gas creates a coffee with less acidity and a creaminess and natural sweetness worth savoring.

If you’d like to try out some more cold brew recipes, you can have a look below for a few cold brew coffees worth a try: 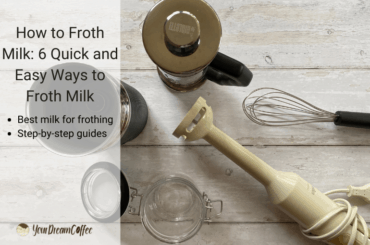 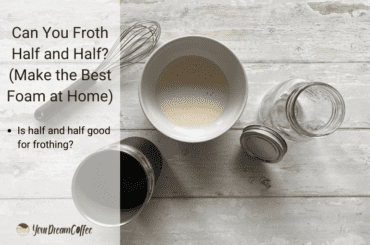 Can You Froth Half and Half? (Make the Best Foam at Home) 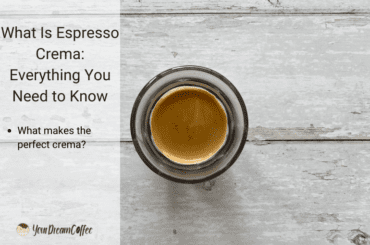 What Is Espresso Crema: Everything You Need to Know In 2022 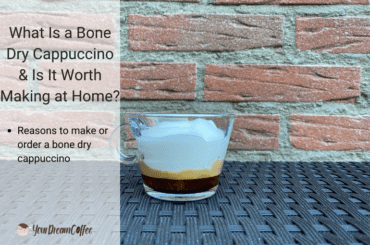 What Is a Bone Dry Cappuccino & Is It Worth Making at Home? 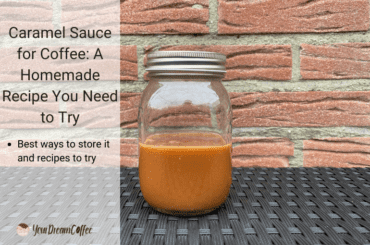 Caramel Sauce for Coffee: A Homemade Recipe You Need to Try 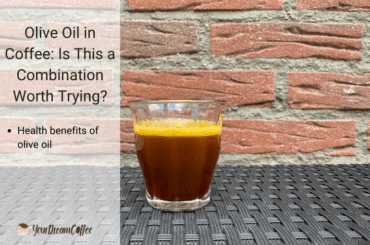 Olive Oil in Coffee: Is This a Combination Worth Trying? 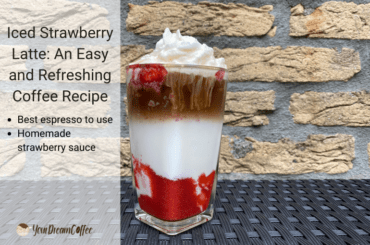 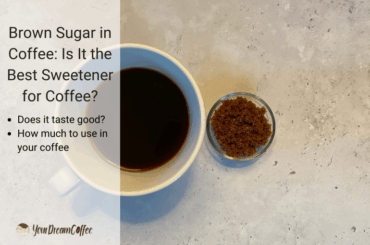 Brown Sugar in Coffee: Is It the Best Sweetener for Coffee?