As cafes sprout around the world, we get more exposed to a variety of caffeinated drinks – cappuccino, espresso, cafe Americano, latte, among others.

While espresso may be a familiar term for many, its variants – long shot and ristretto may not be so and may be challenging to distinguish for beginners.

This article will tackle everything you need to know about the difference between a long shot and ristretto, how different they are from the usual espresso, how they are prepared, which is better, and other more exciting details.

Read on and take a sip of coffee knowledge!

Long shot vs. ristretto, how do they differ?

Long shot or lungo and ristretto or stretto are both variants of espresso with different shot lengths. The other variant is normal or the standard espresso we are more familiar with.

To get a better grasp of the differences between these three, take a look at this table that compares them:

Flavor may be the most relevant distinguishing factor between the long shot and the ristretto.

A ristretto has a less bitter yet stronger, fuller, and smoother taste.

On the other hand, a long shot may be characterized as being more bitter but also more flavorful, having floral hints and different flavors that may not be present in a ristretto or an espresso.

But why so? Their various flavor profiles are a result of their extraction process:

Espresso refers to an Italian method of brewing coffee that entails passing hot water through coffee beans using pressure in an espresso machine.

This process allows the extraction and concentration of coffee compounds that contribute to the characteristic espresso kick.

An espresso machine may be used for a ristretto, espresso, or long shot. Even the same amount of coffee grounds or beans are used.

However, the extracted coffee becomes different because of differences in grind size, water volume, or pull time.

For ristretto, instead of doing a complete espresso extraction, a partial extraction is involved.

In this process, only the initial compounds, which happen to be sweet, acidic, and aromatic, are pressured out of the grounds. Hence, you get to avoid extracting out the bitter compounds, which are usually at the end.

Thus, while ristretto is stronger because it’s more concentrated, it’s not as bitter because it didn’t reach the stage of extracting those bitter compounds. However, if it’s too under-extracted, you might get a cup that’s too sour or acidic for your taste.

Meanwhile, for a long shot, it’s a kind of more prolonged espresso extraction. You force out more of the compounds in the coffee, which leads to a more bitter taste because more caffeine is extracted.

However, you would also get other unique flavors that could only be taken from the very end coffee components. It renders a complexity that many connoisseurs would appreciate. Also, it’s less potent because of the more water that dilutes it.

Coffee grounds finer than the usual espresso grounds may be used to make a ristretto. Less water passes through more refined grounds, leading to a more concentrated flavor.

However, uneven grinding or too fine grounds may result in particles passing through the filter and mixing with the drink, leading to a gritty texture and taste.

If using finer grounds, standard espresso pull time may be followed. The grind size for espresso looks like this:

On the other hand, coarser coffee grounds are used to make a long shot with the same method and water volume. Coarser grains allow more water to flow, extracting more flavors and diluting them.

Coffee dose refers to the amount of coffee grounds you would have for every cup.

Generally, it would be 7 g (0.015 lb) for a single shot or 15 g (0.033 lb) for a double shot, but all espresso variants have the same amount of grounds. Variances are more on the water volumes and pull times.

You can check out the difference between a doppio (double espresso) and a regular espresso in this article. As you can see from the photo below, there is a big difference in serving size:

It’s also important to remember that baristas have different recipes and may tweak the amount of water, grind sizes, coffee doses, among other factors.

Ristretto in Italian means “reduced,” and it may be an excellent way to remember that this kind of espresso needs much less hot water to extract than a typical espresso and a long shot.

Lesser volumes allow the flavors to concentrate more, giving it a stronger and smoother kick.

On the other hand, long shot espressos use more than the usual amount of water. This amount dilutes the flavor, allowing for a milder taste than the different espressos.

However, it is not necessary to change the water volume to obtain a ristretto or long shot. As I shall discuss in the next section, some baristas manipulate their pull time to produce a certain espresso type.

Old espresso machines used to have levers that baristas would pull, leading to the terms “pulling a shot” or “pull time.” Modern machines now use an electric pump. Pull time then refers to how long it takes for the espresso to be made.

Long shots have a longer pull time than ristretto and espresso. This extended period allows the extraction of more coffee components and flavors, such as caffeine, which may be more minor or even absent in the other two shot types.

Thus, unique floral hints you might not get from a ristretto are present in a long shot.

Since it’s smaller and needs to be more concentrated, ristretto needs a shorter pull time. By reducing pull time, less water gets forced through the grounds.

Some baristas use a standard espresso procedure, usual water volume, and grounds, but process time is cut by half. In this way, even if the normal amount of water is added, only a small amount is used.

Which is better: long shot or ristretto?

With all of those comparisons and key differences discussed, you may wonder which is better. Is it the long shot or ristretto? Or is classic espresso just superior?

The choice between long shot and ristretto ultimately boils down to personal preferences. While some appreciate the sweetness and acidity that ristretto brings, others crave the complexity and milder taste that long shot offers.

Thus, it may be better to get a taste of each to know which suits an individuals’ palate better.

What drinks are best for long shot and ristretto?

Espresso, and its variants, do not need to be consumed as they are. While some prefer them straight, others would want them as a base for other coffee drinks.

Often, ristretto and long shot are not strictly drunk straight or as it is. There are certain drinks, such as latte or cappuccino, wherein ristretto may be better suited for as it helps amplify the drink’s taste. Meanwhile, a long shot is suitable for large beverages such as Americano or long black.

For instance, some may prefer having a ristretto as an Americano or latte base. For Americano and long black, more water is added to a ristretto.

Meanwhile, milk is used to dilute a ristretto for a cup of latte or cappuccino. These drinks would have a more exaggerated and intense flavor than the usual.

Meanwhile, a long shot may also be used to make an Americano. A long shot is shorter than a long black or Americano and should not be interchangeable with any of them.

If a long shot is not long enough for you, there’s also caffè crema, a coffee more popular in Europe than in other areas. It’s like a more extended long shot, hence more volume, and would also have a different flavor profile.

Are long shot and ristretto better than espresso?

So, are variants better than the original? Or should we stick to the classics?

Long shot and ristretto aren’t necessarily better than espresso. An espresso isn’t strictly superior as well. Their different flavor profiles allow them to be compared but don’t give one an edge over the other unless by personal preference.

For instance, some may find a ristretto too sweet or acidic than the usual espresso. Or that it doesn’t have the right kick. These may make an espresso or long shot more suited for them.

However, there has been a trend of cafes using ristretto more than the other variants for their drinks.

In some way, you may have already tasted ristretto in your drinks more often than you thought.

Best coffee beans for a long shot, ristretto, and espresso

If you’ve got your own espresso machine and want to give it a try at making a ristretto or long shot, you may be wondering if there are coffee bean types that are more suited for one or the other.

It’s recommended to use low-acidity beans for ristretto, like those from Brazil or Nicaragua.

As discussed, ristretto extraction tends to highlight acidic and sweet tastes, and using these coffee bean types allows you to minimize the sourness of your drink.

Meanwhile, for a long shot, you might want to give denser beans a shot (or pull rather).

The flavors of these beans are hard to extract using ristretto or standard methods, but the extended process used for a long shot may just be able to draw out some of those stubborn compounds.

This may give your coffee a more exciting and novel profile.

These beans are usually roasted darker than other beans, which allows their flavor to stand out even when mixed with milk.

You can check out this article where I talk about the difference between espresso beans and regular coffee beans.

Darker roasts are also regarded to have a more consistent taste. You could even go for an extra dark roast if you prefer this. They look like this:

Tip: If you’re still on the hunt for some good espresso coffee beans, you can find my recommendations here.

Are you wondering how the long shot and ristretto compare to other coffees?

There’s a great variety of coffee around the world, and we’re just starting to unlock them. Getting a regular espresso may be convenient, but it misses you out on the chance of exploring the diverse choice of options.

So if you’re in a curious mood, give a long shot or ristretto a chance. These two have unique flavors – a long shot has a milder, more bitter, and more complex taste, while ristretto has a sweeter, stronger, and more acidic profile.

Take them straight or as a base for another drink. You might find one more suited to your taste than a typical espresso. 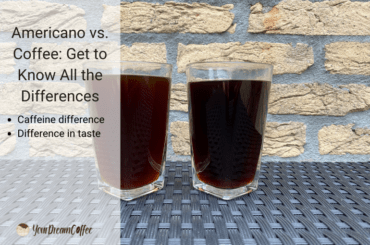 Americano vs. Coffee: Get to Know All the Differences 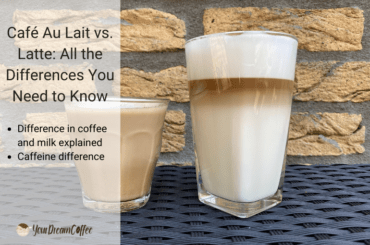 Café Au Lait vs. Latte: All the Differences You Need to Know 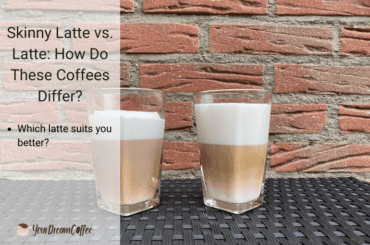 Skinny Latte vs. Latte: How Do These Coffees Differ? 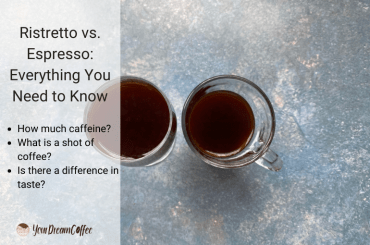 Ristretto vs. Espresso: Everything You Need to Know in 2022